one of the county's larger market towns with fantastic medieval heritage

In the district of West Lindsey, just a 30-minute drive from Lincoln on the westerly edge of Lincolnshire, bordered by the River Trent lies the historic market town of Gainsborough. Home to one of the UK's best-preserved manor houses, Gainsborough Old Hall - a must-see for lovers of historic buildings.

things to do in the Gainsborough area

A hidden gem found in the North of Lincoln. Built by Thomas Burgh in 1460, Gainsborough Old Hall is over 500 years...

Discover award-winning blacksmith experiences, a unique opportunity to learn the art of traditional blacksmithing in North...

Discover this outdoor shopping centre located at the heart of Gainsborough Town Centre. Shop over 30 popular...

Rand Farm Park is a multi award-winning, child-focused attraction for a fun-packed family day out whatever the...

Visit Redhill Farm Shop as you either shop in Lincoln’s famous Bailgate or directly on the Farm in Morton, Gainsborough....

Discover one of the largest rope courses and outdoor adventure parks in the UK with challenging and exciting activities suited to all ages....

Bransby Horses rescues equines, rehabilitates them, gives them sanctuary care and offers equine advice and support to owners. Bransby Horses is one of the UK’s largest...

Hall Farm Park at South Kelsey, set on the edge of the Lincolnshire Wolds is a small family run park which opened in...

Visit the RAF Scampton Heritage Centre, a small museum that acknowledges the Stations historical past, with exhibitions covering the famous 2Dambuster Raids, our First...

The Broadbent theatre is the home of Lindsey Rural Players. The theatre is managed by the LRP and used for their productions....

Willingham Woods is the ideal location for the nature lover with possible sightings of deer, ducks and...

Immerse yourself in 90 minutes of creativity painting your own pottery piece.You don’t need to be an artist, just bring your enthusiasm and eagerness to have some...

local shopping and eateries in Gainsborough

Located at the top of the High Street "Chic Vintiques of Blyton" is a stockist of many different items such as Home-ware ,Antiques, Retro, Vintage, Toys, Games, gifts...

Stockist of Games Workshop and SteamForged Games merch. Event hosting venue, along with training and demonstration... 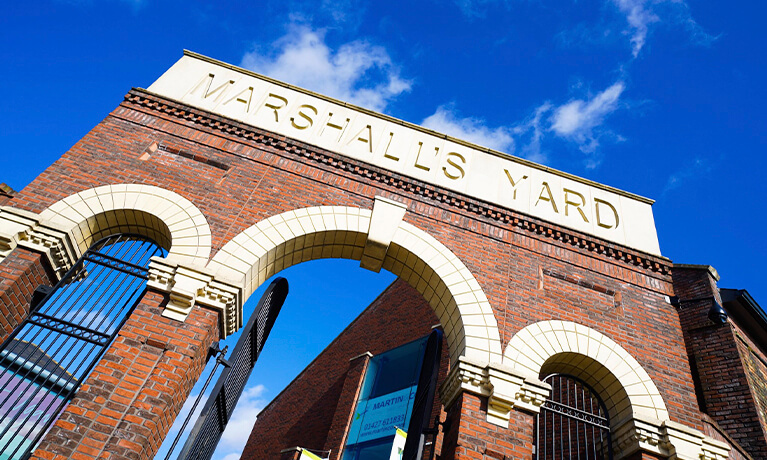 a rich and unique heritage

The Domesday Book, created in 1086, revealed that at that time Lincolnshire was England’s most populous county because of Gainsborough. Its rich history since has included royal visits, hosted by Lord Burgh at Gainsborough Old Hall.

The town’s history dates back as far as Ancient British and Viking times, and had great importance during the Industrial Revolution. Gainsborough was a busy inland port with warehousing, breweries and large engineering firms.

The town has a long-standing history of industry; Gainsborough was the manufacturing base of Marshall, Sons & Co.— a major boiler manufacturer founded by William Marshall in 1848. The site, now known as Marshall’s Yard, is home to thirty-five stores including; an Italian restaurant, coffee shops, health club and landscaped plaza.

Established in 1847, but recently bought by the Wallis Family in 2016. The Cross Keys Stow is known for revolutionizing the way people eat and enjoy food. They take...

Visit Redhill Farm Shop as you either shop in Lincoln’s famous Bailgate or directly on the Farm in Morton, Gainsborough....

A cosy pub and kitchen that serves fresh locally sourced food that is prepared in house and served alongside cask ales and...

Experience a friendly welcome and enjoy great food made for you. Uncle Henry’s is part of a family farming business, run by the Ward family....

Ferry Ales Brewery is a 5 barrel micro brewery with the capacity to brew up to 5,000 pints of beer each week....

A cosy country pub that overlooks the Lincolnshire Wolds. Serving fresh food with a range of hand pulled...

places to stay near Gainsborough

Ashlin Farm Barns offers 5 luxury holiday cottages, each with their own private hot tub, only 5 miles from Lincoln, in beautiful countryside....

A unique experience aboard a luxury yacht. Discover options for a chauffeur, onboard chef, photographer, flowers, balloons and much...

Audleby is a delightful mid-terrace maisonette with three beds and sleeps 6 nearby Lincolnshire Wolds...

Open all year round and set in the idyllic Lincolnshire Wolds. Adult Only Touring, Luxury Lodges and Holiday Homes. Well Stocked Fishing Lakes and a Platinum Multi-Award...

Ground-floor apartment for two with a romantic setting from which to embark on their adventures into the nearby Lincolnshire Wolds...

Hemswell Court has recently been awarded a five star status for guest accommodation and...

The 5 themed yurts on this beautiful campsite are nestled just 1 mile away from the beautiful village of Welton in Lincolnshire and are situated within an 11 acre...

Setcops Farm, nestled by the edge of the Lincolnshire Wolds has six self catering holiday cottages and a log cabin for couple retreats....

East Farm Cottage is situated overlooking open fields on our 400 acre conservation award-winning farm. Nestling at the foot of the Lincolnshire Wolds - a perfect...

Glentham Grange is set in the beautiful Lincolnshire countryside near Market Rasen, surrounded by...

Meet the horses at Bransby Horse, one of the UK’s largest equine welfare charities. Dedicated to improving the lives of horses, ponies, donkeys and mules.

more about the North of Lincoln

Discover more about things to do, food and drink and places to stay in the area.